The clean and crisp desert air, the jingle of the chains, the audible yelling and laughter in the distance: this is what playing a round of disc golf at the Santa Cruz River Park Disc Golf Course is like.

For those not in the know: disc golf – or frisbee golf – is like the game of golf, except instead of golf balls being shot with a club towards holes in the ground, frisbees are thrown from a concrete tee pad toward above ground baskets installed on the course.  Like regular golf, each basket is still called a hole. It is a game of skill, played solo, in pairs, or in groups, where the true opponents are yourself and the elements.

Nestled within Santa Cruz River Park in the El Rio Acres neighborhood near Speedway and I-10, this hidden treasure, established in 1978, is frequented by disc golfers most mornings and afternoons.

Playing the course is free to the public, so purchasing discs and minimal equipment, such as a disc golf carrying bag, is all you really need.

On a sunny Thursday morning on Rodeo Day in February, I made a trip to the Santa Cruz River Disc Golf Course where I chatted with disc golfers to get their take on the course in general. 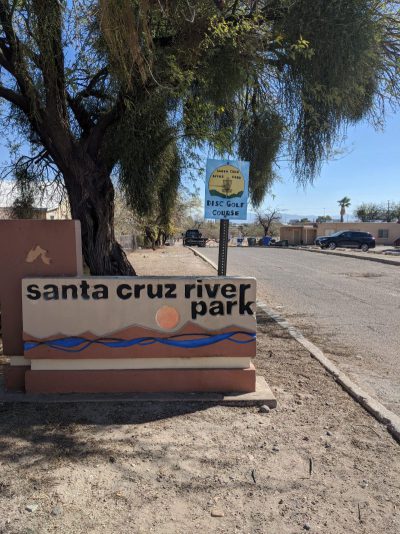 The 18 hole course sprawls out over an impressive desert landscape, filled with mesquite and Palo Verde trees that accent the course. Despite the hum of the Interstate in the near distance, the atmosphere was tranquil.

Besides a bit of wind, the weather was optimal for a round of disc golf, and the people I talked with were friendly.

Crispin Jeffrey-Franco, teacher, 37, was with Lenny Mariano, and Alf Bergesen, a group of educator friends, practicing their putting skills on the practice basket just off of the parking lot.  Jeffrey-Franco filled me in on the best times to get a round in.

“The weekend in the morning can get pretty busy, I think the league here plays Sunday mornings,” said Jeffrey-Franco. “So Sunday mornings  like — 8 to 10 — is probably the worst time because the league will be here and they’re big, but any other time mid-week is great.”

Lenny Mariano, 32, explained that he thinks this is the best course in the city for people learning to play the game of disc golf because of the proximity of the concrete tee pads in relation to the baskets at every hole.

“This is probably the best ‘A’ tee pads for beginners.  So if you’re trying to get into disc golf, this is a great course if you just play the ‘A’s’,” Mariano said.  “And once you get more skilled, then you move to the ‘B’s’ and you’re definitely going to be playing a much harder course.” Across the course, I spoke with Austin Grothe, 28. Some of the elements he enjoys about the course are the layout and the mandatory line of disc markers — referred to as mando’s — which dictate the boundaries of each hole.

“It’s got concrete pads, I know a lot of the courses here do, but some don’t.  There are so many shots you can throw, So I change my discs a lot on different holes,” Grothe said. “I think this is probably one of the better courses in Tucson, I think I’ve played all of them now.  It’s got a lot of trees which makes for some fun holes, and some good mando’s in the front.”

With outstanding desert scenery and a wealth of open space which allows for social distancing without losing out on social interaction, Santa Cruz River Park Disc Golf Course remains a go to spot for Tucson area disc golfers.

Just don’t plan on playing the course when it’s overly windy outside.

“Don’t play here during the haboob,” Alf Bergeson said.  “We did that a while ago, and yeah, it was gnarly.”

If you’re even a little bit interested in the sport, enjoy outdoor activities, and are looking for something relatively inexpensive and fun to do during the pandemic, be sure to check out the course. 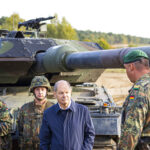