Since 2004, Pima Community College has given local artists the opportunity to enrich the PCC environment with their contemporary outdoor sculptures. This year, the opening ceremony was taken to the virtual world with a live stream via YouTube on Friday, October 30.

PCC Dean of the Arts, Steven Higginbothom, opened with the prominent message that, “particularly at this time, when we are all cooped up in our homes and maintaining our social distance … the purpose and value of art is so apparent.”

Lee Lambert, PCC’s chancellor, and Chair of Pima’s Board of Governors, Damian Klinko, followed, asserting their appreciation for art, especially at this time. To close the introduction, Mike Stack, part of PCC’s art faculty, offered his excitement for the program and added that the artists have all taken on their “distinctive visions to the wide spectrum of viewpoints and perspectives that make up the diversity that is the Sculpture on Campus program.”

Here’s a look at the sculptures featured during the event. 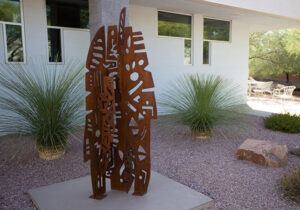 “Totem: Deconstructed Shadow” is the title of Joan Waters’ three-dimensional metal piece. She describes her inspiration as the shadows cast in our desert surroundings. Waters also makes a statement about the shadows individuals may feel emotionally and encourages her audience by reflecting, “we’re all human and we don’t need to judge each other so harshly because this is just part of being human.” 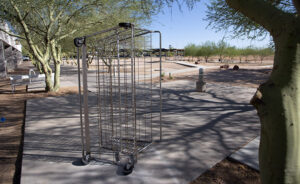 Carlton Bradford’s idea for “Doublewide” sprouted from a past memory of when him and sister saw a shopping cart that had toppled on its side. “It just seemed really funny… because it was a utilitarian object that was rendered useless,” he said. The six-foot tall shopping cart Bradford sculpted represents America’s obsession with consumption, especially in the age of the pandemic, as “it’s still not known why toilet paper was being hoarded.” 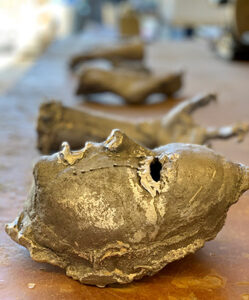 “Persephone’s Memory” by Piper Bast takes a feminist approach to art with its unconventional beauty. Bast explains that she finds beauty in the grotesque and takes inspiration from her personal experience of having grown up in an “extremely religious, misogynistic household which added even further demands [than those of society].” 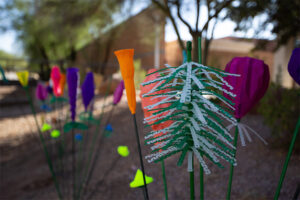 Jorge Caballero and Ivan Castro teamed up to create “Blumenfelsen,” a union of 3-D printed flowers. Caballero mentions that he wished to produce something out of the box with this experiment by using 3-D printed art to represent nature. He currently awaits the strength of the structure and will be keeping tabs on how well the color lasts. 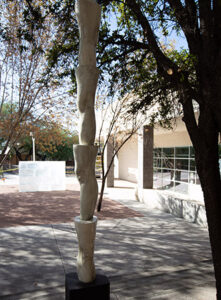 “Tower of Knee” is Willie Parrish’s new sculpture on campus and its title gives way to what the piece is — a stack of seven cast concrete and painted legs. Parrish revealed that this project has been in the making for years. He started by taking molds of real people’s legs. The bottom leg of the sculpture, or the “anchor,” as Parrish coins it, is that of Melinda Sargent, an all-American NCAA sprint champion. The knee joint is the weakest in the human body when it comes to strenuous physical activity, which represents the vulnerability that inspired Parrish to take this on. 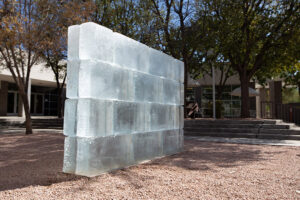 Olivier Mosset presented “ICE,” an experiment meant to encourage PCC students to “do what you want to do… and then see what’s happening.” Mosset was intrigued to see the result of this brick wall of ice, claiming, “to be honest, I’m pretty selfish. I mean, I’m interested in seeing the piece up and the rest of what people think or say about it.” 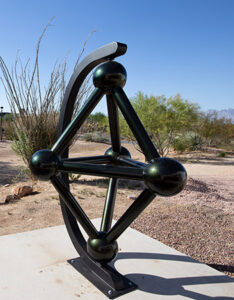 Kevin Caron opened his presentation of “Gyre” by saying, “when you first look at it, you’ll think ‘my God, that is so simple,’ but the more you look at it, the more complex it actually becomes.” Caron’s spinning spectacle pays tribute to his love for geometry and movement and looks back at a simpler time when “you used to play, when you used to just have fun.” The artist hopes his sculpture makes people happy and allows them to stop and take a moment for their curiosity.

The PCC Sculpture on Campus event for 2020 has successfully accrued over 400 views so far. Take a moment to relax and check out the virtual stream on YouTube.