This month is a time to look beyond our history books to recognize African Americans who have made a difference in the world. I chose to look at our world, the United States, and as a woman, I chose my world.

Two of countless stories here are of and from Margot Lee Shetterly and Ava DuVernay.

“Hidden Figures” is a book written by a Black female writer, Margot Lee Shetterly. Shetterly grew up in Hampton, Virginia, where she says “the face of science was brown, like mine…I knew so many African-Americans working in science, math and engineering that I thought that’s just what black folks did.”

According to an interview with Worcester Polytechnic Institute, Shetterly has a personal connection with the story of “Hidden Figures”, as she knew the women in the book growing up in Hampton. The women actually worked with her father who was a career Langley Research Scientist.

As a result, she also started the Human Computer Project. The project is Shetterly’s endeavor to recover the names and accomplishments of all the women who worked at NACA and NASA from the 1930s through the 1980s. The women worked as computers, mathematicians, scientists and engineers.

The research Shetterly did for her book led her to surprising revelations. Shetterly was surprised to find that women computers were not the exception, but rather the rule. If you have not seen the movie or read the book, I strongly encourage you to do so.

Director Ava Divernay is a Black American director who became the first Black female nominee for best picture in 2014. This came fifty years after the story she told in the movie “Selma”.

The march on Selma is something we all have read and know about in some aspect. We all know (I HOPE) of Dr. Martin Luther King Jr and his contribution to the Civil Rights Movement. I hope we all can at least think of Dr. King when we hear Selma, but what do we remember from our history books?

I can tell you I was not aware of the sheer inhumanity of it all. Unfathomable in any aspect, but utterly incomprehensible to me that it was at a time my mother can remember, just a few years before I was born.

Director Ava DuVernay told a story that has been told countless times. I did not know the director of this movie was a Black woman when I first saw it seven years ago. When I think back to my first viewing of Selma, I now wonder if the female perspective was what tore at my soul so profoundly. I remember sitting there with my mother in the theater and feeling  my heart break during the first several minutes of the movie. I truly believe that a man could not have told it so poignantly. 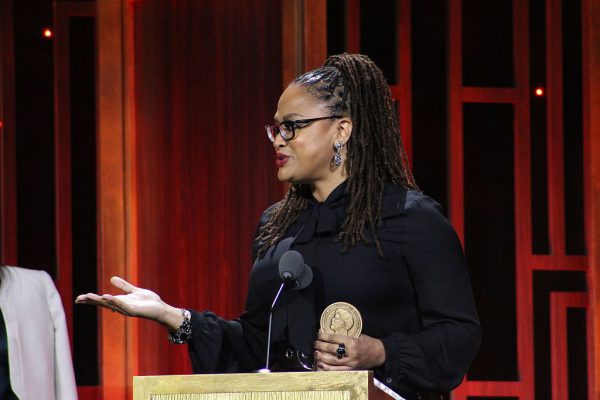 The opening scene is shown through a femine lens. Where a male director may be descriptive in the details of a church bombing, DuVernay focuses on the young girls getting ready for church, their crisp white dresses and patent leather shoes, their braids and white gloves. The slow motion of these girls going through their Sunday routine appears innocuous, giggling as they come down the stairs. The focus on these images before and after the bombing causes a visceral reaction, drawing the viewer into the innocent start of their day and feeling the shock and disbelief of the bombing and loss of  life and innocence of these young girls.

In the movie, DuVernay was able to authentically convey what it felt like for those walking across Edmund Pettus Bridge during the violence of Bloody Sunday. DuVernay’s father actually grew up in Alabama near the Pettus Bridge

In an interview with Michael T. Martin about her work and Selma specifically,  DuVernay commented “we don’t need to construct characters because the truth is jaw dropping enough, and if I can stay true to that, I think it will be okay.

I would encourage anyone who has not seen this movie to do so. From the opening scene to the portrayal of the march from Selma to Montgomery, Selma will make you wonder what else has been whitewashed for aesthetics in our history books. Had you heard of the violence on Edmund Pettus Bridge? I had no idea there was such bloodshed during this march and it really calls into question the way we teach the civil rights movement in schools across the country.

Ava DuVernay’s other works include “I will Follow”, “Middle of Nowhere”, and the documentary “This is the Life”, a feature length documentary on hip-hop, which won her various audience awards.

This month reminds us of the deficiency in the equality and recognition of Black Americans. It gave me the opportunity to acknowledge just  two of countless amazing women who brought to life a part of our history.