This article has been edited to clarify and correct some facts.

Mahatma Gandhi once said “The greatness of a nation and its moral progress can be judged by the way its animals are treated.”

Homeless animals have always and will always be an issue that society faces. There are many people in the world that are making a difference in animals’ lives whether it is working or volunteering at a shelter, adopting an animal or just donating to an animal shelter.

Nikki Reck, spokeswoman for the Pima Animal Care Center, one of the animal shelters in Tucson, offered information regarding the programs that PACC has, how to volunteer and their process of adopting animals.

According to Reck, the biggest difference between adopting an animal now and before the pandemic occurred is that you now need an appointment to visit the shelter.

Making an appointment is easy: Simply visit the website and fill out the survey, whether you’re looking for a dog or a cat.

If you’re interested in a certain animal, you have the option to put that on the application. If you do not know which animal you are interested in, you are able to make an appointment and go to the shelter to look at the animals there.

The shelter has fewer dogs present because most are now in care. Dogs in care are still eligible for adoption. You can schedule an appointment to visit them by emailing [email protected] PACC still receives 25 to 50 animals every day.

Recently, PACC has had a lot of fosters as well as adoptions. Reck said that while there was a huge interest in fostering/adopting early on in the pandemic, there is still a big need for both today.

This year, the shelter had a massive push to get animals out of the shelter by adopting or fostering. The results were stunning. Over 900 people from this community stepped up and became fosters or adopted, Reck said.

Because the community came together to help, the shelter and volunteers can provide time with the animals in the shelter as they do not have so many to focus on. They also were able to accept more homeless animals to help them find a forever home.

Shelters often get a sometimes undeserved reputation of euthanizing a high percentage of their animals. At PACC, Reck said that nine out of 10 pets that enter the shelter leave alive.

Reck said that there are only two instances where an animal would be euthanized: if the animal is medically suffering and there is nothing the shelter can do or if the animal is deemed too dangerous to place with someone.

“We have a very high live release rate and we’ve very proud of it,” Reck said. “And we work very hard. So every pet at PACC gets a chance.”

Reck said that PACC puts a lot of effort into making sure a dog that is getting adopted goes to a home that is a good fit for the animal.

Studies and anecdotal evidence show that foster homes are better for animals than remaining in a shelter. Foster animals tend to present better to the possible adopter. You can see their personalities better.

Even through the pandemic, volunteers have never stopped coming. Reck said that PACC is slowly starting the process of approving new volunteers. You also can volunteer with specific types of animals, although the shelter encourages training on every type of situation that may occur.

Some people volunteer just to help with the vast amounts of paperwork. Volunteers can help run playgroups for the dogs or socialize the cats.

However, volunteers are needed most in the clinic or admissions because both are mentally and physically overwhelming. In admissions, you see people come that need to surrender their pet. PACC will try to work with the owner, whether it is just temporary housing needed or a fencing issue. PACC will do as much as it can to help owners keep their pets.

FriendsofPACC.org is another way to donate. It has an Amazon wish list on the website for the supplies that are needed at the shelter. There also is the opportunity to make a financial donation. by filling out the form on the website. You even can choose which program you want your donation to go toward. Most people who donate usually choose the “greatest need.” 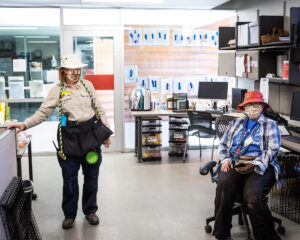 Reck offered tips on what to do if someone sees a stray animal. She said that most strays that are seen only live a few doors down from where they are found. If you can get the dog, first try knocking on doors.

If a stray comes to the shelter with no collar or microchip and no license, state law says that they go up for adoption in only three days. If the animal has any sort of identification, it becomes five days before it goes up for adoption.

Unfortunately, if the owners come to the shelter and the animal already has been adopted, legally the new owners do not have to give the animal back to the old owners.

This is why Reck stressed the importance of microchipping your pets and making sure that there’s a working phone number attached to it. This can be easily done at freepetchipregistry.com/.

There are different emergency situations that PACC is able to help with, such as if you see a stray and it’s medically suffering, PACC will send someone out to pick up the dog.

Also, if you see a stray that does not seem friendly, PACC also will send someone out. Reck said that PACC receives 30 to 70 calls a day.

From Monday to Friday, the shelter is open from noon to 7pm, while on weekends they’re open from 10am to 5pm.”We have those hours to try and help folks who work 9-5 jobs be able to come in more often,” Reck said.

Thousands in Santa Cruz County without power after outage