The Pima Community College Baseball team hasn’t let its foot off the pedal in the last month.

Phillip Sikes and Austin Bryan both won ACCAC Player (Sikes) and Pitcher (Bryan) of the Week for April 8-14. Sikes batted .533 during that span with five RBI and five run scored to go along with two stolen bases. Bryan was 2-0 during the week giving up one run in ten innings along with 15 strikouts.

The Aztecs were hosted by the Yavapai Community College Rough Riders on April 13 in Prescott, where Pima swept the Rough Riders during the doubleheader.

Pima had Bryan on the mound during the first game and he gave up 1 run in the first inning before settling down and tossing a complete game, his fourth of the year. He gave up 4 hits and racked up 11 strikeouts, bringing his record to 9-1. Sikes almost single-handedly tied up the game in the fourth inning as he hit a single, stole second, moved over to third on a ground out and scored on a balk.

Pima would take the lead in the fourth after back-to-back singles from Enrique Porchas and Richard Ware, Ware would score on a pass ball to score the go-ahead run and would never look back. Pima took on one more in the seventh inning when Porchas hit a solo home run.

Pima took the second game in comeback fashion as they fell behind early 5-1 after two innings. The bats came alive in the third and fourth inning, as they put up 5 runs, 2 in the third and 3 in the fourth. Rollon, Sikes and Lake all drove in runs in a 3-run fourth and Pima took the lead in the sixth on a Rollon RBI single 7-6 .

Pima got a much-needed road sweep against the Central Arizona College Vaqueros as Pima took over the fifth spot in the conference from Central with the win. The Aztecs won the first game 7-6 but had to claw their way back from a 5-run deficient twice. Pima fell behind 5-0 after three innings and behind 6-1 after four. Pima broke out for 5 runs in the fifth inning when Sikes hit a 2-run single to plate Cummings and Lake. Padilla hit a sacrifice fly and Karl Koerper drove in Cummings. Pima loaded the bases again in the fifth before the Vaqueros balked in the game-tying run. Pima beat Central in the second game by 14 runs as the Pima bats explode for 15 runs in the last 3 runs. Connor Nantkes got the win, pitching five innings and giving up 1 run, bringing his record to 4-4.

Pima swept the Chandler Gilbert Coyotes in a doubleheader at home.

The Aztecs won the first game 4-3 in comeback fashion when Bryan and the Aztecs fell behind 3-0 after two innings before Bryan shut it down, blanking the coyotes for the next 2⅓ innings.

Pima got on the board in the fourth inning when Cummings scored on an error and Rollon scored on a sacrifice fly hit by Sikes. Cummings tied the game up in the fifth with a RBI single that drove in Porchas to knot up the game at 3.

Garrett Lake led off the bottom of the seventh inning with a double. Lake was moved over to third by a Jacob Jacome sacrifice fly and followed by a game-winning walk-off single off the bat of Cummings to earn the Aztecs a hard-fought victory. Pima won the second game in a more comfortable fashion.

The Aztecs won the second game 6-1 on the arm on sophomore pitcher Hayden Udall who tossed a nine-inning complete game, giving up 1 run in the fifth inning, and blanking the Coyotes the rest of the way. Padilla led the offense going 2-4 with 4 RBIs including a 3-run shot in the third inning. Rollon, Sikes and Jacome all drove in runs as well.

The Aztecs traveled to Douglas to play a doubleheader against the No. 7 team in the nation, the Cochise College Apaches, who came in with a record of 34-7.

The Aztecs didn’t fare well on this trip as they got dropped both games 9-2 to the Apaches bringing their record to 26-14 with a 12-11 conference record. 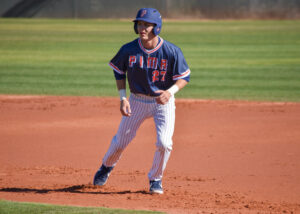