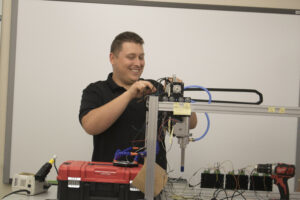 Pima Community College has started a partnership with the University of Arizona’s ENGR 498 class.

UA Engineering needed more space to work, which meant moving the initiative moved its operation to the Mechatronics lab at the Downtown campus.

The capstone project that Team 18029 has been working on is a weed-killing device.

The weed-killing device uses a pneumatic punch which pinches and can drill holes  to kill to weeds and increase crop production.

The device identifies weeds through its manual operation as well as a camera positioned on its surface as of right now the machine is operational.

The pneumatic punch will position itself over the weed and stomp it. Its overall purpose is to work in shaping the new frontier of agricultural technology.

The Capstone Projects for this year already were halfway complete when UA contacted Pima and asked if they could spare any space for the weed-killing device to make its debut. Team 18029 has only been working at Pima since the end of February.

The first meeting and tour for this partnership took place on Jan. 16. Pima students were not yet directly involved with the weed-killing device, but Pima students in the applied technologies path at Pima were encouraged to ask the team of six to eight students working on the project questions.

Pima and UA are working on getting Pima students involved in next year’s capstones projects. There are currently 118 projects that are coming out of UA’s ENGR 498 class, which is the UA capstone class. Pima is only hosting this year’s capstone project.

The projects are worked on year round. When the partnership with UA began, the team only had built the frame of the device.

The different applied technologies at Pima have the ability to strengthen the UA engineering team includes: wielding, mechatronics, electrical, machining and graphic design.

Each team member possesses a different speciality that helps along the way.

The projects are industry sponsored, and each team is given $4,000 for its project.

For the ENGR 498 projects, there were 85 sponsors. The sponsors ranged from places including Canada, Mexico and all over the nation.

“This semester is really about laying out the logistics of this partnership,” said Pima Applied Technologies Dean Greg Wilson.

The device was sponsored by Mark Simons and the bio-systems engineering department at UA. Their mentor is Gary Redford, who is also the coordinator for ENGR 498 class.

Gary Redford said he has mentored 66-plus projects, with the number of projects probably being closer to 70.

“See, I’ve been doing this for 11 years, and I’ve mentored a lot of good projects,” Gary Redford said. “Some of the most successful capstone projects to date include an autonomous telescope cart and toilet shut-off system. The autonomous telescope gets the telescope, sets it up and takes it back to the garage. The toilet leak sensor was a redundant valve system to prevent toilet overflow.”